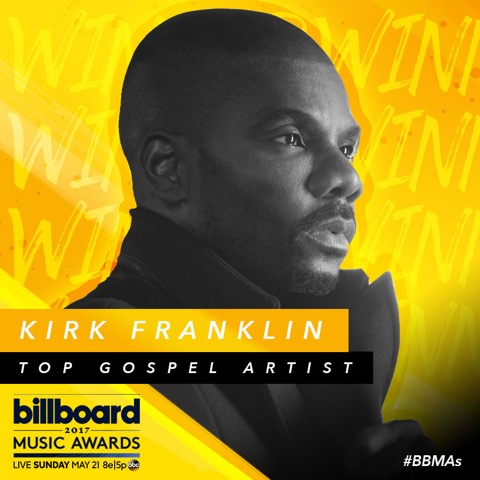 Fueled by his wide range of beloved hits on the charts from his award-winning album LOSING MY RELIGION, Kirk Franklin’s Billboard Music Award win continues a hit streak, following multiple accolades over the past year including GRAMMY®, Stellar, and Dove Award wins.  Travis Greene’s Billboard Music Award win follows on top honors at the Stellar Awards earlier this year as a first-time winner, garnering 7 awards with recognition for “Made A Way” and his hit album THE HILL.

Held in Las Vegas on May 21st, the 2017 Billboard Music Awards based the annual nominations on various measurements of musical consumption tracked by Billboard and its data partners over the past year, including radio airplay, music sales, social engagement, touring and more.  Check out the videos below for Kirk Franklin and Travis Greene’s thank-you messages.  Fans will be able to catch both Kirk Franklin and Travis Greene performing live at JoyFest, taking place on May 27th in Charlotte, NC (at Carowinds) and on July 15th in Doswell, VA (at Kings Dominion).