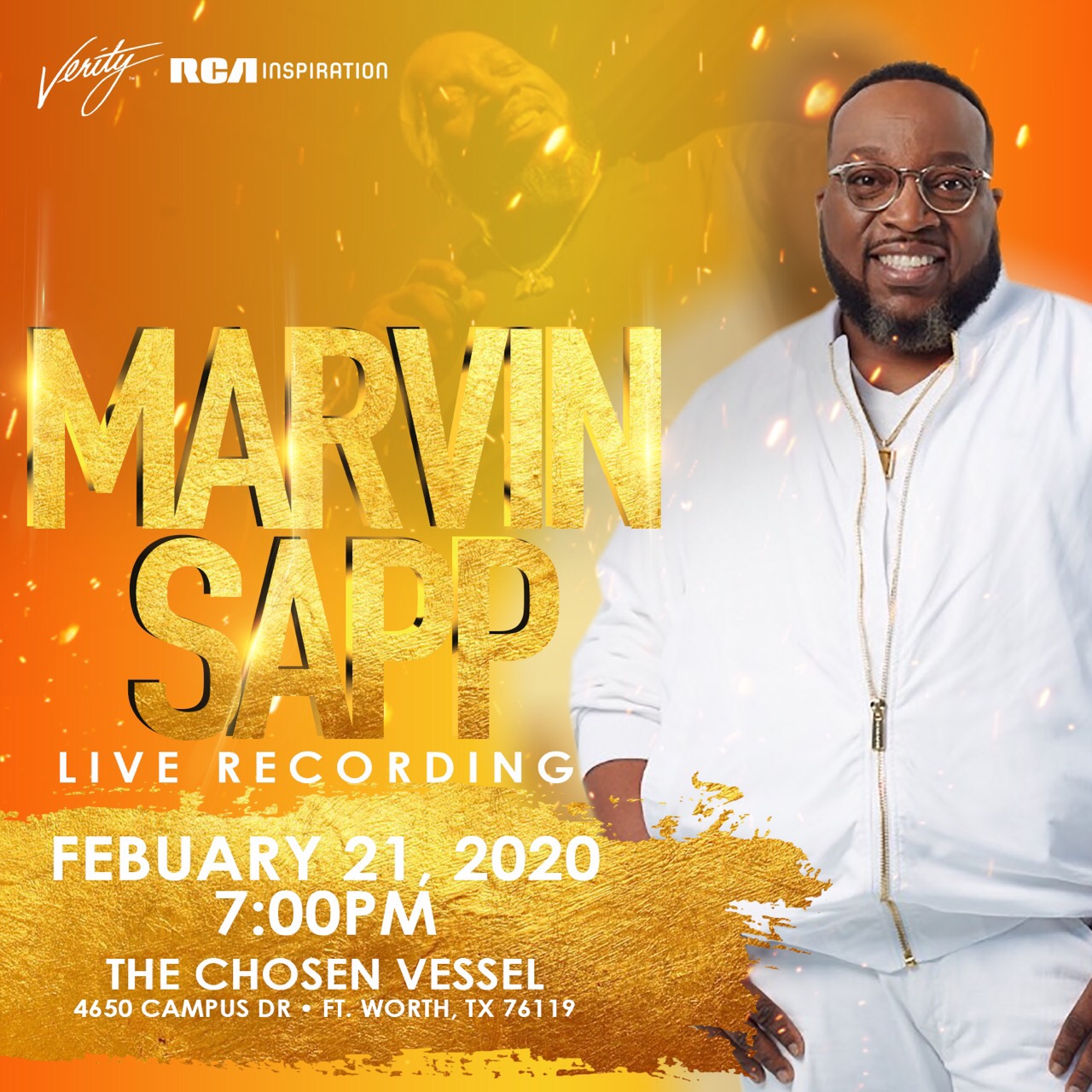 Recording Will Take Place at His New Church, The Chosen Vessel Cathedral

Fort Worth, Texas – January 9, 2020 – Internationally celebrated, multiple award-winning Gospel recording artist Marvin Sapp has a new music project slated for later this year that he will record live at his new church, The Chosen Vessel Cathedral in Fort Worth, Texas.

The recording is set for Friday, February 21st at 7 p.m. CST, and will reunite Sapp with his musical masterminds – producer Aaron Lindsey and vocal director Myron Butler. Tentatively titled The Chosen Vessel, this album will be the follow up to Sapp’s 2017 release, Close. This will be Sapp’s first live recording since I Win, which was recorded live in 2011.

All of Sapp’s previous live recordings have taken place in his hometown of Grand Rapids, Michigan, except I Win, which was recorded at Evangel Cathedral in Fort Washington, Maryland. Sapp is excited to bring the electrifying energy of the live recording experience to his new city, which has embraced him warmly.

“This recording is special to me because I’m doing it in my new home – literally and figuratively. I never imagined that I would live in and pastor in the DFW Metroplex, and now that I am here, I can’t wait to continue to connect with the community and immerse my church into this side of my ministry through this live recording,” Sapp said.

The Chosen Vessel will be released on RCA Inspiration/Verity later this year.

Phil Thornton, SVP and General Manager of RCA Inspiration/Verity, says, “Marvin Sapp continues to be one of the most powerful and prolific voices in Gospel, whose live performances and compelling songwriting always make a vibrant, profound experience that is unforgettable. Truly a don’t-miss event, I can’t wait to see the thrilling songs that Marvin and his incredible musical team have created, performing his new album in his new church live for the first time!”

In addition to being a gifted preacher, Marvin Sapp is an author, radio show host and internationally renowned singer who has enjoyed a decorated 30 year music career, receiving 24 Stellar Awards, 2 Soul Train Music Awards, 2 BET Awards, 3 Dove Awards and 8 BMI Songwriter’s Awards for sales along with many other accolades and honors from national, regional and local institutions.  He is a multiple Grammy and Billboard Award nominee. Sapp was named one of Billboard’s 2019 Top 10 Gospel Artists and his greatest hits album, The Very Best of Marvin Sapp, was one of Billboard’s Top 10 Gospel Albums of 2019. Sapp became Senior Pastor of The Chosen Vessel Cathedral in Fort Worth, Texas on September 15, 2019.