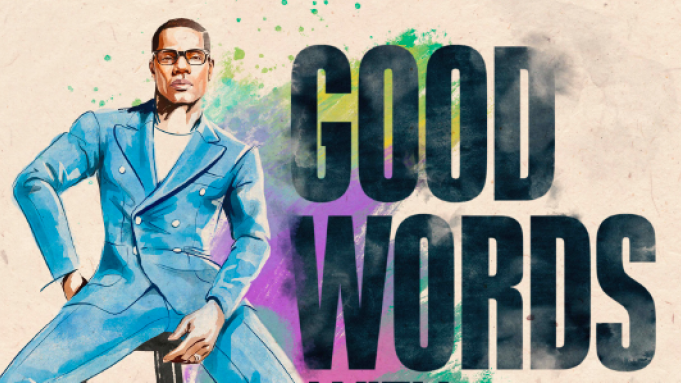 New York – February 9, 2021 – Sixteen-time GRAMMY-winning artist, songwriter and producer Kirk Franklin and Sony Music Entertainment today announced the launch of “Good Words with Kirk Franklin,” a new podcast series that welcomes people from every cross section of life who seek inspiration and empowerment. Through intimate conversations exploring faith, redemption, and the realities of today’s world, Franklin invites listeners into shared moments with some of the biggest names across entertainment, beginning with Pharrell Williams. The first episode is available now.

In a deeply personal and introspective conversation that explores shared common experiences, Franklin provides listeners with fascinating insight as Pharrell discusses his approach to life and his relationship with God. Pharrell explains the lasting impact of Gospel music and the Pentecostal Church on his formative years, and his discovery of “purpose” and how it informs his life. The wide-ranging, candid conversation spans discussion around the COVID-19 pandemic to lighter moments that touch upon Pharrell’s well-known skincare regimen and his new series, Voices of Fire, that recently launched on Netflix.

Throughout the season, Franklin will lead thought-provoking conversations with some of the most impactful thought leaders, artists and activists, including Chance the Rapper, Chris Paul, Glennon Doyle, H.E.R, Kelly Rowland, and more. Together, they engage and explore their thoughts around race, religion, politics, music and self-expression. The conversations will make space for laughter, joy and lighter moments and Franklin will offer original music penned for the series.

Franklin said, “Good Words is a podcast where culture meets faith, and a place where my guest can be real and open like you have never heard before.”

“Good Words with Kirk Franklin” is produced in partnership with Spoke Media. The executive producer is Keisha “TK” Dutes.

Kirk Franklin wants everyone to know one thing. He’s never going to stop pushing the envelope. Franklin’s latest musical offering—and 13th studio album—is the aptly titled LONG LIVE LOVE from his RCA-distributed label, Fo Yo Soul Recordings. But even before the album’s May 31st release date, its first single is already laying down some serious groundwork.

“Love Theory” bowed at No. 1 on Billboard’s Hot Gospel Songs chart and has kept the position on lock for thirty-nine weeks. The vibrant track marked the singer’s record-extending seventh No. 1, and his second start atop the chart. With 1 million U.S. streams in its first week per Nielsen Music, “Love Theory” also opened at No. 1 on Gospel Streaming Songs as well as Gospel Digital Song Sales. Its colorful and energetic video has accumulated over 17.3 million YouTube views and counting. The album “Long Live Love” and single “Love Theory” won two Grammys in January 2020. Franklin says, “It’s my constant story about this message of love, the love of God, and me trying to play my role in that conversation.”

“We’re living in an era where so many things compete for the attention of our hearts,” says Franklin. “They don’t all have to be bad, but these things can become what matters to us more than they’re supposed to. “Idols” and every song on the album just bubbled up and out—a tapestry of what I believe, how I feel, what I want, and my struggles. It’s the good, the bad, and the ugly,” says Franklin.

After culling through 50 to 60 song ideas, Franklin began collaborating with his fraternity of co-producers, Ron Hill, Shaun Martin, Max Stark, and S1. His last album, 2015’s Losing My Religion, won a GRAMMY Award winner for Best Gospel Album in 2017. It boasted guest turns by gospel and R&B artists including Kim Burrell, Lalah Hathaway, Tasha Cobbs, and Tamela Mann. Franklin opted to let the music—a flavorful mélange of gospel, R&B, hip-hop, and other influences—play the feature role on LONG LIVE LOVE.

Celebrating his 29th career anniversary this year, the winner of more than 40 Stellar Awards, an NAACP Image Award, and 16 Dove Awards is also busy pushing the envelope in other endeavors. Franklin brought his total GRAMMY tally to 16 Grammys at the 62nd annual ceremony.

In 2021, Franklin has his eyes set on bringing some fantastic additions to the Kirk Franklin Praise channel on SiriusXM and starting production on his bio-pic. “You already know what I’m going to say,” Franklin answers with a hearty laugh when asked about the secret behind his career longevity and indefatigable drive to keep pushing. “It’s because of somebody bigger than me and you. I’m the most non-perfect person in the world. But having an opportunity to be here still and communicate this faith that I believe in … I don’t know what else I could ask for.”

Spoke Media is a premier podcast content company on a mission to tell great stories and pass the mic. Spoke’s previous work has earned a Society For Features Journalism Award, an iHeartRadio Podcast Award, and a finalist spot for a Shorty Award. Spoke has created podcasts for Sony, HBO, Netflix and Spotify, as well as their own original podcasts, including The Left Ear w/ Dakota Johnson and Untitled Dad Project (named the #1 podcast of 2019 by IndieWire).

At Sony Music Entertainment, we fuel the creative journey. We’ve played a pioneering role in music history, from the first-ever music label to the invention of the flat disc record. We’ve nurtured some of music’s most iconic artists and produced some of the most influential recordings of all time. Today, we work in more than 60 countries, supporting a diverse roster of international superstars, developing and independent artists, and visionary creators. From our position at the intersection of music, entertainment, and technology, we bring imagination and expertise to the newest products and platforms, embrace new business models, employ breakthrough tools, and provide powerful insights that help our artists push creative boundaries and reach new audiences. In everything we do, we’re committed to artistic integrity, transparency, and entrepreneurship. Sony Music Entertainment is a member of the Sony family of global companies. Learn more about our artists, creators, and labels here.