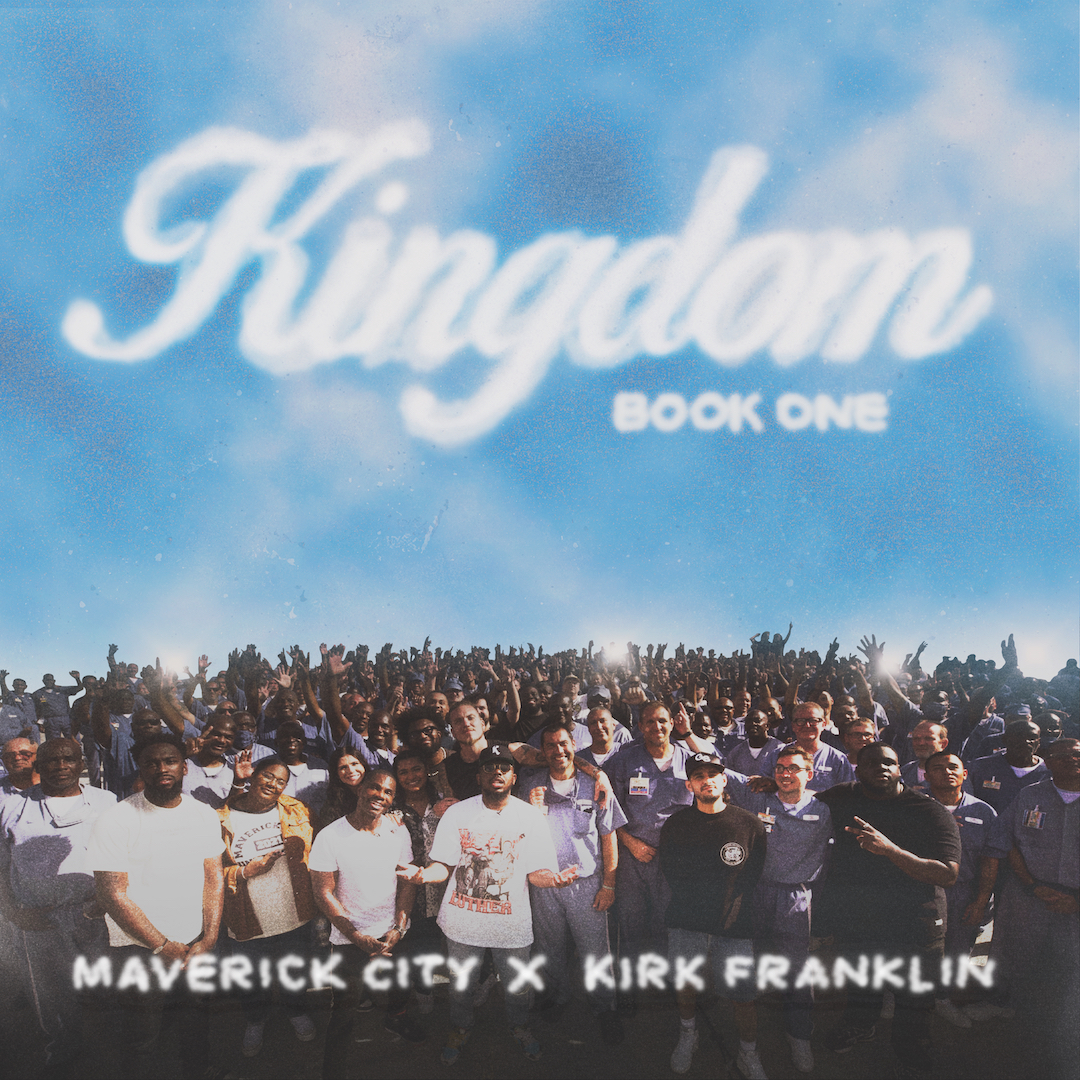 Recorded in a Florida prison yard, the record raises awareness for mass incarceration and features background vocals from more than 1,300 Inmates

‘The Kingdom Tour’ set to kick off June 1 in Miami, FL

On Friday, June 17, GRAMMY award-winning music collective Maverick City Music and 16-time GRAMMY winner Kirk Franklin will bring the injustices around mass incarceration – and the voices of 1,300 inmates – to center stage with the release of their collaborative album KINGDOM Book 1, out June 17th via Tribl Records / Fo Yo Soul Entertainment / RCA Inspiration. A cornerstone to the thought-provoking collection and the first glimpse into what’s to come, the album’s title track “Kingdom” is available today (5.20).

Taking the idea of “prison performance” to another level, the genre-transcending, 11-track project made entirely from the grounds of a Florida prison, features Maverick City Music and Franklin recording the experience alongside more than ninety-percent of those who remain incarcerated at the location.

Joined by men from every walks of life – different gangs, races and backgrounds – ‘Kingdom Book 1’ evolved from an unfiltered message of love and universal acceptance and became a passionate, powerful movement that embodies the collective’s core beliefs of inspiring and helping others.

“I think this album is for every fan that loves music, and our hope is that these songs and the stories behind them will serve as a way to raise awareness to the challenges that people face everyday – many of which are forgotten about,” Maverick City Music’s Jonathan Jay explains. “For me, the most impactful part of this experience was the prisoners’ reaction to simply being remembered as humans. It was an overwhelming sense of gratitude and excitement that carried through every day we spent with these men. It was unbelievable, and I think if more people would just become aware of these feelings, they would want to help find a solution for the issues that come with incarceration.”

“We want awareness around the topics that affect the community that we represent, as black and brown people, primarily,” Maverick City Music’s Tony Brown continues. “It’s important that we’re able to not just share our songs, but also share the heart and the lives that these songs are coming from. Most of us, in some way, have been impacted by these issues, and as we mature as artists, the things that matter to us the most need to take precedence. This is one of them.”

“In addition to awareness, I hope this album motivates people to do something about these issues,” says Brown. “It’s being proactive – giving to foundations that help figure out how to stop mass incarceration, volunteering in communities that are grossly affected by it, and acknowledging that this is a real thing. If we can get a small amount of people to simply acknowledge this issue exists, then that’s a huge win for us.”

This year is poised to be the biggest yet for the young pioneers of Maverick City Music. The group just won a GRAMMY for Best Contemporary Christian Music Album and completed a historic televised performance on the show. Nominated across four categories at the 2022 Billboard Music Awards, with triple nods in one category, and receiving three 2022 K-Love Awards nominations earlier this week, the group will take the music and the movement behind ‘Kingdom Book 1’ on the road this summer with their headline ‘Kingdom Tour‘ alongside Franklin. Set to kick off on June 1 in Miami, the extensive, 37-date trek hits arenas across the nation through the end of July, and fans can purchase tickets to the nearly sold-out tour HERE.

2. Fear Is Not My Future – Feat. Brandon Lake, Chandler Moore

7. My Life Is In Your Hands – Feat. Chandler Moore

Maverick City Music is a multi-racial, multicultural, genre-bending collective that brings hope to all regardless of whatever race, gender preference and faith. Launched in 2018 after hosting seventeen songwriting camps, which brought together more than 100 Christian artists and songwriters Maverick City Music is a collective comprised of breakout artists who include: Chandler Moore, Brandon Lake, Naomi Raine, Chris Brown, Dante Bowe, Tiffany Hudson, MJ George, Joe L Barnes and Aaron Moses. The group’s album ‘Old Church Basement,’ a collab album with Elevation Worship, broke streaming records at both Apple Music and Spotify. On Apple Music, the group set a new worldwide record for the most first-day streams for a Christian and Gospel album, and on Spotify, the album broke the U.S. record for the most streams in a day for an album by a Christian group and was No. 4 out of all U.S. albums its first weekend of release. Maverick City Music recently won a GRAMMY for Contemporary Christian Album, and beyond being the first eligible year for nomination, they also performed on the televised show.

For more than 30 years, artist, songwriter and producer Kirk Franklin has made an indelible impact on the culture bridging Hip-Hop, Pop, and Gospel together and creating timeless hit songs and albums along the way. Kingdom is Franklin’s first studio album since his 2019 album, LONG LIVE LOVE, which debuted at # 1 on Billboard’s Top Gospel Albums chart and earned two GRAMMY Awards. In addition to this collaboration with Maverick City Music, Kingdom Business, the new television series which Franklin is an executive producer of, premiered on BET+ on May 19th.